Below zero temperatures and howling winds couldn’t slow the heated racing at Maine’s Sunday River Resort, where 900 horsepower off-road trucks thundered across the mountain for Red Bull Frozen Rush.  The one-of-a-kind event, now in its second year, featured the country’s top off-road racers squaring off in a head-to-head competition on a racecourse built on a ski slope.  The crowd of 10,000 spectators watched as Bryce Menzies was able to dethrone reigning champion Ricky Johnson in the finals to claim the crown as the 2015 Red Bull Frozen Rush Champion.  The competition is part of the Red Bull Signature Series, the most progressive collection of action sports events in the world.  Presented in partnership with GoPro, Polaris, Samsung, BF Goodrich and Sunday River, a full length broadcast of Red Bull Frozen Rush airs Sunday, March 1 at 2:00 pm ET on NBC.

Only in its second year, the event has already become hotly anticipated by the participating drivers and teams for its unique location, snowy terrain and head-to-head format.  Regarded as the newest chapter in off-road history, Red Bull Frozen Rush brought nine of the best off-road truck drivers from across the country to try their hand at conquering the treacherous and freezing-cold New England terrain. 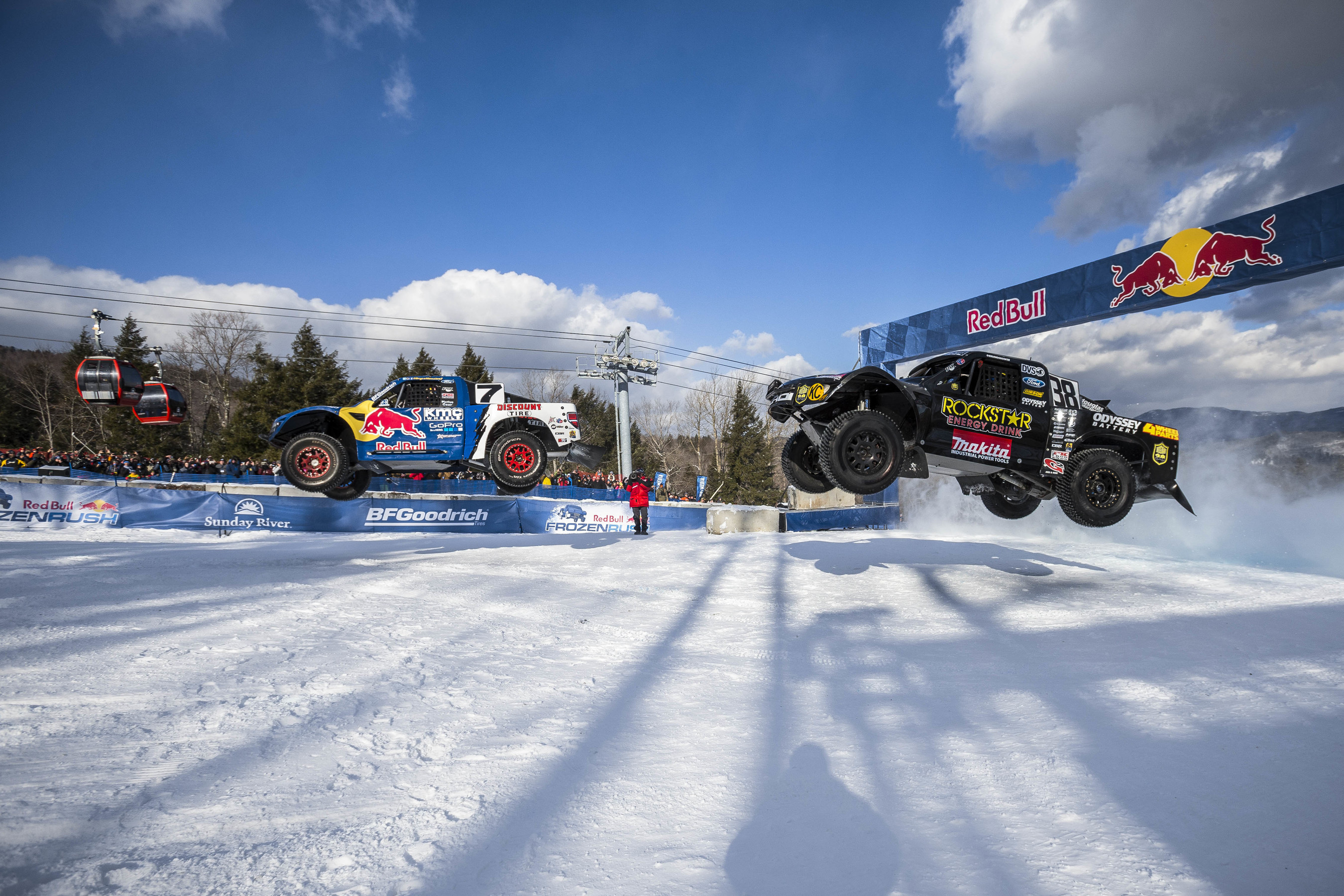 After an afternoon of intense racing, the finals set up a showdown between former teammates Ricky Johnson and Bryce Menzies, who raced together on the Menzies Motorsports team for the past four years.  Off the line, the two trucks were close, with Johnson pulling slightly ahead and almost forcing Menzies to run up over his rear.  As the two trucks split on the course, Johnson got crossed up on the first jump and skidded sideways off the landing.  He minimized the mistake, but it would prove costly, as it gave Menzies a solid lead headed into the six-lap final.  Johnson spent the next five laps trying to catch Menzies, but the young driver refused to make any significant mistakes.  While Johnson was able to gain ground, it was not enough, and Menzies took the Red Bull Frozen Rush Championship.

“Ricky’s been my teammate for four years, and he’s pretty much helped me through everything,” said 27-year-old Bryce Menzies.  “He’s helped me though three championships in Pro 2 and he gave me a lot of advice coming into this race.  Our plan was to get me and him in the final and we did it.  To start off the season with a win is huge, and I couldn’t be more stoked…and I’ve never been this tired in an off-road race except for the Baja 1000.”

The distinctive terrain and weather conditions present several challenges, with one of the most obvious being traction.  While off-road trucks are renown for their ability to find traction in places other vehicles can’t – dirt, rocks, sand and mud – snow is another thing entirely.  To combat this issue and ensure tires hook up, each race truck was specially modified with specially designed Mud-Terrain tires from BFGoodrich’s Research and Development team.  These one-of-a kind tires feature almost 700 metal studs on each tire, providing maximum grip and control.

About The Red Bull Signature Series
The Red Bull Signature Series is the most progressive action sports property in the world, featuring best-in-class events such as Frozen Rush, Joyride, Rampage, Straight Rhythm, Mint 400 and Volcom Pipe Pro.  These events represent a collection of the most innovative snowboarding, skiing, surfing, mountain biking, skateboarding, motorsports and BMX events, on custom courses inspired by the athletes themselves.  Red Bull Media House and the NBC Sports Group showcase this world-class property of action sports events all year long on NBC through state-of-the-art production and storytelling.