Journalist and anchor Anderson Cooper has created a reputation of being willing to go to dangerous parts of the world in order to get his story.  Many watched in fear for him as he was attacked while reporting on the events that unfolded in Egypt.  This moment for him had to make him mindful of an important theme that has been a significant part of both his career and his life: the frailty of humanity.  Cooper’s father, Wyatt Emory Cooper died when Anderson was only 11. The tragedy did not end there; when Cooper was 21 his only brother at the time committed suicide (his mother would later remarry and provide Cooper two half brothers) by jumping to his death from his mother’s 14th floor terrace.  Reflecting back on these tragedies, Cooper said  “Loss is a theme that I think a lot about, and it’s something in my work that I dwell on. I think when you experience any kind of loss, especially the kind I did, you have questions about survival: Why do some people thrive in situations that others can’t tolerate? Would I be able to survive and get on in the world on my own?”

In spite of these hardships, Cooper was fortunate to have Gloria Vanderbilt for a mother.  Her enormous affluence and influence has opened doors for him that are afforded to very few.  He went on the study at Yale University where he received a degree in Political Science and decided in no time to pursue a journalism after short stints as an intern for the Central Intelligence Agency.  His first media gig was with Channel One after a failed attempt to join ABC News. Later he found himself on ABC News as a correspondent, eventually rising to the position of co-anchor on its overnight World News Now. He added host of an ABC reality show, The Mole to his resume. 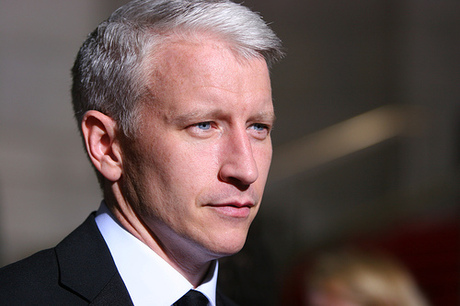 After two seasons on The Mole and the tragedy of September 11th, 2001, Cooper decided it was time to go back to “real news” and joined CNN.  His first position on that network was as co-anchor (with Paula Zahn) on American Morning. Since 2003 he has been the anchor of one of the network’s most popular shows, Anderson Cooper 360.  Regarding his philosophy as a journalist and anchor, Cooper has told Mediabistro that “I think the notion of traditional anchor is fading away, the all-knowing, all-seeing person who speaks from on high. I don’t think the audience really buys that anymore. As a viewer, I know I don’t buy it. I think you have to be yourself, and you have to be real and you have to admit what you don’t know, and talk about what you do know, and talk about what you don’t know as long as you say you don’t know it. I tend to relate more to people on television who are just themselves, for good or for bad, than I do to someone who I believe is putting on some sort of persona. The anchorman on The Simpsons is a reasonable facsimile of some anchors who have that problem.”

This month Anderson Cooper had taken a dramatic shift in his career again by launching his new daily syndicated talk show, Anderson.  Unlike his CNN program, which he continues, his new show focuses on human interest, health issues, stories of inspiration, and more.  I have been hosting radio shows (and for the past ten years, the Price of Business) for two decades and have done my fair share of lifestyle shows.  I have interviewed the TV and movie celebrity about their passions (typically the environment or diet), have discussed the rare but dangerous disease that people need to be aware of, or have discussed the new toy available to the wealthy; but these type of shows are different from the hard edge political and business stories I have typically focused on.  I cannot imagine making the shift that Cooper is making.  In fact, it is not even a “shift” as much as a “split” as he continues to do his news show on CNN while interviewing the parents of conjoined twins on Anderson.  I have done my homework and have not found any stated reasons for Anderson doing a show that is significantly off the hard news path.  I doubt seriously that money alone would be the motivation.  I have personally watched a few segments of his new show and he is clearly comfortable in this element.  Maybe as a man who has experienced so much of death, he interprets a fulfilling life as one that explores many different opportunities.  Whatever the reason, I expect to see more of Cooper Anderson in the future.