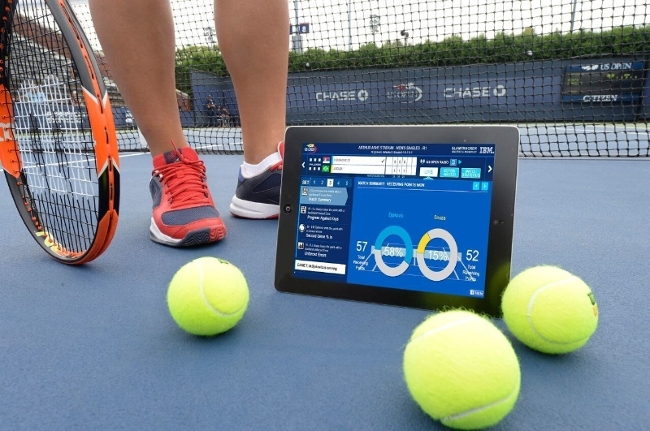 By IBM, Special for  USDR

IBM (NYSE:  IBM) today unveiled an array of new and enhanced technologies designed to capture, analyze and deliver real-time scores and insights to fans of the 2015 US Open tennis  tournament.

IBM is teaming with the United States Tennis Association (USTA) to bring a combination of predictive analytics, cloud, mobile and social technologies that will enable tennis enthusiasts to follow every US Open serve, volley and match point in real-time. Whether they are courtside at the Billie Jean King National Tennis Center in New York, watching from home or keeping up on the action and scores on their mobile device, tennis fans will have cutting-edge technology to stay connected with the  tournament.

The immersive and engaging digital experience IBM and USTA are serving during the 2015 US Open tournament features a variety of new and improved innovations,  including:

“Year after year, IBM’s technological expertise creates an incomparable mobile and digital experience for US Open tennis fans,” said Nicole Jeter West, senior director of Ticketing and Digital Strategy, USTA. “We’re excited to partner with IBM again to push the boundaries of fan engagement and entertainment to bring the US Open to life and promote the game of tennis to fans across the  globe.”

Throughout the tournament, fans can instantly access a vast range of tennis stats and information, including scores, in-depth analysis and live video. Mobile apps for Apple iPhone and iPad, and Android devices designed and developed by IBM Interactive Experience in collaboration with the USTA place match stats and tennis court action at fans’ fingertips to enhance their overall US Open experience. The US Open mobile apps also offer an interactive and informative second-screen experience for fans watching the tournament on  TV.

IBM also designed and developed the US Open tournament website, USOpen.org, with new data sets and advanced data visualizations that are powered by IBM SlamTracker analytics and cloud computing technologies. SlamTracker provides US Open fans and media an unprecedented level of analysis, insight and engagement as the match unfolds, including ball and player movement via a simple, user-friendly dashboard. Analyzing where a ball lands and how far a player runs in a given match offers a dynamic dimension to match analysis that uncover patterns and insights into player performance and dynamics that impact the outcome of a  match.

In addition to analyzing real-time data, SlamTracker also delivers historical player, match, tournament data, and provides a new social sharing feature that allow fans to share insights via Facebook. IBM also has embedded social sentiment data into SlamTracker, providing an analysis of Twitter conversations about players while they are on court, including measurements of volume and tone of the sentiment over the course of the  match.

SlamTracker analyzes more than 41 million data points from eight years of Grand Slam tennis match data to identify three performance indicators called the “Keys to the Match” that can affect a player’s ability to succeed. During a match, SlamTracker synthesizes the real-time data, including serve statistics and winning shots that allow fans to interact with the data to gain deeper insight into match  dynamics.

Sports analytics for other businesses and  industries

The same IBM mobile, analytics, cloud and social technologies that enable the USTA to connect with millions of global tennis fans throughout the two-week tournament also help IBM’s clients in every industry. Companies in banking, government, healthcare and retail are more effectively engaging with and serving their customers with help from IBM technologies. Many businesses can learn from how sports organizations are using analytics, cloud computing and other technologies to better understand and improve their daily  operations.

For instance, during most of the year, the USTA runs like a small business, but during the two-week US Open tournament it becomes a demanding data and performance hungry organization that rivals a large bank, hospital or retailer. With the need to ensure uninterrupted access to data and insights to meet the unpredictable demands of millions of tennis fans around the world, the USTA can serve as a model for how businesses of all sizes can take advantage of sophisticated mobile, analytics, cloud and social computing  technologies.

The US Open is the most highly attended annual sporting event in the world. To support and accommodate the overwhelming spike in traffic to the USTA’s digital platforms as the tournament progresses, IBM Cloud offers continuous availability and enormous scaling potential to manage unpredictable spikes in traffic throughout the  tournament.

IBM provides an end-to-end technology infrastructure to power the US Open experience that captures, analyzes, publishes, stores, monitors and secures the historical and real-time data that is at the heart of the enhanced US Open fan experience. The experience is underpinned by a combination of hardware, software and services, including IBM Power and System x systems, IBM Cloud Orchestrator and the SoftLayer infrastructure from IBM. These technologies enable IBM to help the USTA to rapidly meet changing fan demands by dynamically adding capacity to the hybrid environment that powers the tournament’s digital  platforms.