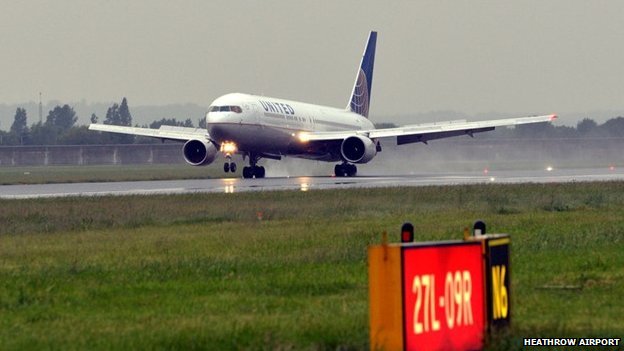 United flight 958 was the first of United’s 17 scheduled flight arrivals at Terminal 2 today. The airline also is scheduled to operate 17 departures from the terminal today, bringing all of its operations at Heathrow – previously split between Terminals 1 and 4 – “under one roof” for the first time.

Click here for video of Terminal 2: The Queen’s Terminal

“We’re extremely proud to be the first airline to operate from the new Terminal 2 and to consolidate our Heathrow operations in the airport’s most advanced terminal,” said United’s Bob Schumacher. “Heathrow is one of the most important airports in United’s global network, and Terminal 2 represents a huge improvement in the service and facilities we are able to provide to all our customers, whether they’re departing, arriving or connecting.”

Two new lounges opened today for the use of United’s premium customers at Terminal 2: United Club and United Global First Lounge. Totaling about 22,000 square feet, the lounges feature floor-to-ceiling windows with views of the airfield and offer complimentary food, beverages and Wi-Fi in addition to business facilities, shower suites and other amenities and services.

United is currently the only airline operating at Terminal 2. Starting later this month, United’s 22 Star Alliance partners servingHeathrow will progressively move to Terminal 2, enabling faster, more convenient connections for United customers to and from flights operated by other Star Alliance airlines, as well as Aer Lingus.

United operates up to 17 flights per day to Heathrow from six of its U.S. hubs: Chicago, Houston, Los Angeles, New York/Newark, San Francisco and Washington, D.C./Dulles. United operates more daily flights to Heathrow than any other U.S. carrier.

United Airlines and United Express operate an average of more than 5,200 flights a day to 369 airports across six continents. In 2013, United and United Express carried more passenger traffic than any other airline in the world and operated nearly two million flights carrying 139 million customers. United operates nearly 700 mainline aircraft and, in 2014, will take delivery of 35 new Boeing aircraft, including the B787-9 as the North American launch customer, and will welcome 27 new E175 aircraft to United Express. The airline is a founding member of Star Alliance, which provides service to 195 countries via 26 member airlines. More than 85,000 United employees reside in every U.S. state and in countries around the world. For more information, visit united.com, follow @United on Twitter or connect on Facebook. The common stock of United’s parent, United Continental Holdings, Inc., is traded on the NYSE under the symbol UAL.