By Texas A & M University, Special for US Daily Review.

Later this month, the 100th anniversary of one of history’s most tragic events will occur – the sinking of the Titanic –and the question often asked is: Could such a disaster happen again? The answer is not only “yes,” but it has happened many times since and will almost certainly happen again, says a Texas A&M University oceanographer. 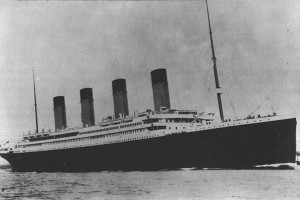 Mahlon “Chuck” Kennicutt II, professor of oceanography who has conducted marine research for 30 years, says the Titanic has captured the public’s attention as few ships have ever done. The largest ship afloat at the time, the RMS Titanic sank in the North Atlantic on April 15, 1912 after hitting an iceberg on her maiden voyage from England to New York City. The ship carried more than 2,200 people – over 1,300 passengers and about 900 crew. The sinking resulted in the deaths of 1,517 people and is etched in the history books as one of the worst maritime disasters ever.

“We remember the Titanic because of so many odd things associated with it: the ship was called ‘unsinkable’ and it carried many notable people on board, not only were many lives lost but many lives could have been saved if there had been more lifeboats, it ran into an iceberg in the open ocean, it was on its maiden voyage, and on and on,” says Kennicutt.

“It has captured the public’s imagination for decades and spawned dozens of books and films. But many other maritime disasters have occurred since it sank, but they did not garner nearly the attention that the Titanic did.”

The recent capsizing of the Italian cruise ship Costa Concordia (which carried more than 4,200 passengers and crew) resulted in 30 deaths and has captured worldwide attention, but since the Titanic, there have been numerous other ship tragedies.

He notes that in 1987 in the Philippines, the passenger ferry Dona Paz collided with an oil tanker, igniting more than 8,000 barrels of petroleum products. More than 4,300 people died and later it was shown that the ferry had far exceeded its passenger and cargo limits.

In 2002, another ferry, the Le Joola capsized off the coast of Africa and killed more than 1,800, while in 2006 another ferry had mechanical trouble and coupled with high winds, sank in the Red Sea, killing more than 1,000 people. One highly publicized disaster occurred in 1994 when the cruise-ferry Estonia had faulty locks and it sank in the Baltic Sea, killing 852. There are dozens of other examples.

“The Titanic was the most technologically advanced ship at the time, with the latest in navigation and radio equipment. It even had its own newspaper,” Kennicutt says.

“But as so often the case, sometimes it’s just not enough, especially when humans are involved. There is no such thing as a 100 percent safe or ‘unsinkable’ ship as we learn time and again. The space shuttle, for example, was the most complex machine ever built, with 2.5 million moving parts, but suffered two catastrophic failures ending in tragedy,” pointing to the 1986Challenger and 2003 Columbia disasters.

Kennicutt says one reason there are bound to be future maritime disasters is the sheer number of ships in the water. It’s been estimated there are about four million commercial fishing vessels in the water at any given moment, not to mention the tens of thousands of military ships, oil tankers, cruise liners and pleasure craft.

“The Gulf of Mexico is a good example,” he points out.

“It has thousands of shrimp and fishing boats, recreational craft, commercial shipping lanes and don’t forget the nearly 4,000 oil and gas platforms that have supply ships constantly departing and arriving.

“The oceans have become a virtual interstate highway system multiplied many times over being critical to global commerce,” he adds. “With that many ships, accidents are bound to happen.

“Despite our best efforts and highly sophisticated technologies, human error is the one major unknown that is difficult to control as we tragically saw in the recent BP oil spill. No matter how advanced we make ships, they are still operated by people. Even highly trained and experienced ship captains make mistakes. As they say …’to err is human.'”

Sponsored: Are you paying too much for your unemployment insurance? How would you know if you were? Find out how you can fight back from excessive unemployment costs by emailing  bmuyco@usabusinessradio.net and put “unemployment costs” in the subject line.