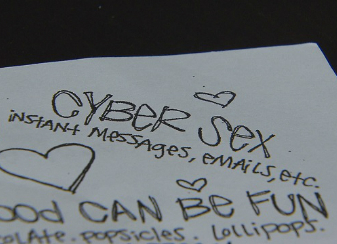 Believing there may be some “criminal activity” going on at a taxpayer-funded school sex conference, the local sheriff is seeking to shut it down.

Sheriff Tom Bergin says he’s reached out to the Clatsop County District Attorney because he believes “there may be some criminal activity at the conference,” according to KOIN.

Last week, it was revealed the conference – in its 20th year – goes well beyond “promote safe sex and prevent teen pregnancy,” as organizers claim.

A pamphlet distributed at the session suggested different things children can do together, including, “bathing together, shaving each other, wearing each other’s underwear, role playing, buying an extra-large pair of pajama bottoms to sleep in together, lap dances and strip teases,” EAGnews reported last week.

Another example floated by Silverberg included “how to pleasure someone else over the Internet.”

“Teledildonics basically refers to the control of sex toys over the Internet; the remote use of sex toys,” the speaker said, according to the news station.

In addition to the content from the Virtual Fem website, numerous handouts, such as one that encourages cyber and phone sex, are passed out to high school and middle school students in attendance.

A sampling of the lessons shocked those that reviewed them.

One such handout explains “How to get your groove on fluid free.”

“It says in this booklet that was handed out and given out to all young people.”

“Meth is widely used for a million reasons to have lots of sex with lots of partners for long periods,” one of the handouts reads.

After the explosive report, both the Oregon Department of Education and the Oregon Health Authority – the agency that hosts the conference – refused to talk about it.

Rep. Sherrie Springer, the vice chair of the House Education Committee, tells KOIN she “absolutely will be suggesting” the committee review the conference.

“I really do think the House Education Committee should take this up as an issue and get a briefing as a minimum from the Department of Education and ask precisely what is being taught to kids,” State Rep. Julie Parrish said.

“Young middle school kids are being exposed to these materials that are far outside the norm.”