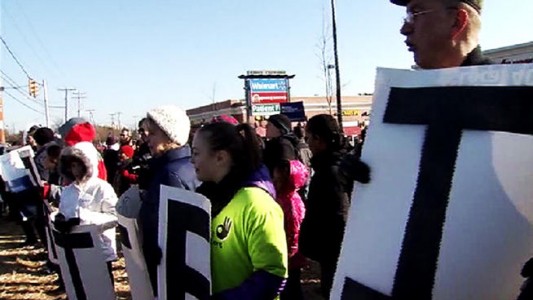 Union front groups are staging Black Friday protests in several cities around the nation today to generate publicity and disrupt Black Friday shopping in their ongoing PR campaign against retail employers. In actions that include very few current employees of brands being targeted, union members, their worker center activist allies and professional protestors sang songs, carried signs and chanted through bullhorns in protests more focused on generating media attention than helping workers. The deceptive Black Friday campaign, designed to look like worker uprisings, has been planned for weeks, including designating protestors in big media markets for arrest.

“Unions, desperate for new dues after decades of declining membership, have embraced non-profit worker centers to do their dirty work for them,” Worker centers are labor organizations, they clearly fit the definition,” said Ryan Williams, media director for Worker Center Watch, a coalition of business owners and concerned citizens dedicated to exposing unions’ abuse of the worker center organizational model. “It’s away that allows the unions to skirt labor organizing laws by letting the activist groups they sponsor to attack employers for them. Big Labor is spending millions of dollars on a massive charade against job creators at a time when our economy can least afford it.”

In recent days, several egregious practices by unions and their worker center allies have been exposed by the media and researchers, including:

In recent weeks the unions use of the worker centers they finance and guide to skirt organizing regulations has come under increasing scrutiny by Congress and others. Earlier this week a Maryland circuit judge in Anne Arundel County banned protestors from coming onto the property of a large retail store they were planning to demonstrate against.

By using the non-profit worker centers to carry out these aggressive tactics against employers, unions such as the United Food and Commercial Workers Union (UFCW) and the Service Employees International Union (SEIU) are skirting labor laws to push their agenda

A recent study released by the U.S. Chamber of Commerce showed that unions and certain foundation allies are funneling millions of dollars through worker centers to drive their political and social agendas. The report, The Emerging Role of Worker Centers in Union Organizing: A Strategic Assessment (PDF), details the tremendous financial support that worker centers receive from foundations such as the Kellogg, Ford and Rockefeller.